I spent two days in Jyväskylä this week. It was a work related trip, so I spent nearly all the time in the Craft Museum of Finland. I had searched the Internet for restaurants that serve vegan food so I could easily find something to eat on the lunch break. It looks like there’s two restaurants that are easy for vegans: Soppabaari and Katriina.

On the first day I went to Soppabaari with two other women. I had been there earlier, and I knew it’s a nice restaurant. The vegan soup of the day was carrot and coconut soup and it was served with bread. My omni coworker had the same soup, and her soup was garnished with cream and mine with fresh herbs. The food was good, and the other ladies were pleased that I took them there. 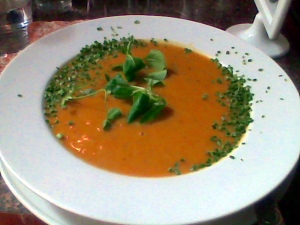 On the second day I went to vegetarian restaurant Katriina. The restaurant reminded me of a school canteen, but you can’t expect a fancy restaurant with such low prices: soup lunch was only 6 Euros (2,70 for students) and regular lunch was 7 Euros. The soups of the day were pureed carrot and bean soup, lentil and vegetable soup and another pureed soup, which I already forgot and the regular lunch was a rice and bean casserole. The salad selection was rather boring: cabbage salad with few cucumber and radish slices, and peas, corn and mung bean sprouts. Again, like a school canteen. I had the lentil soup, some salad, a slice of rye bread and a bread roll. The bread roll was really good, I think they might make those themselves. And there were also peanuts you could add to your soup or salad. The soup was a bit too salty for my taste, but in general everything was okay.

I think Soppabaari is better than Katriina, but I could go to Katriina again. I think most of the customers were students, and I can understand why it’s popular among students.

Here we go with yet another simple but nice food from the old cookbook. Jerusalem artichoke is a funny root vegetable. It was a very common one over here before the introduction of potato, and even for a long time (several centuries) after that. Yet during the last 100 years it has been somewhat forgotten, quite likely due to potato being providing a better harvest.

For us and our community garden project, this very rainy summer was a quite a disaster, the amount of potato we were able to raise was far from last year’s huge success. However, this might be mitigated by the jerusalem artichoke which is growing wildly around the area where we have our small plot of land.

So, while harvesting the last batch of our own potatos, we also collected a small bag of jerusalem artichokes. Of course, the logical next step was to find some food from the old books which uses them, and here we go with the soup. It’s simple, tasty, open up for variations according to your own tastes and everything. I just hope you don’t have to buy jerusalem artichokes from the market, or if you have to, I really hope they aren’t as expensive as around here, which is quite ridiculous considering you can find them growing wild here and there…

Peel the Jerusalem artichokes and put them immediately into cold water to prevent them getting dark. Bring the broth to boil and cook the Jerusalem artichokes until soft. Puré with a blender. Melt the margarine in a pot and sauté the flour in it for a minute. Add some soup, mix well, add more soup, mix again and add the rest of the soup and mix. Slowly boil 10 minutes, stirring often. Add water if the soup looks too thick (the original recipe called for 2,5 l water, but we used 1,5, which was enough). Add cream, season with salt and pepper and heat thoroughly.

A month ago me and my three coworkers went to Jyväskylä to the Birthday of Finnish national costume. Of course we had to eat something during the day and we found a soup restaurant called Soppabaari (Soup Bar).

Soppabaari is a small and cosy restaurant. It serves soups, pastas, drinks and some tapas style foods. The soup and pasta menu changes daily.

That day they had 5 dishes to choose from, and four of them contained animals or dairy. I asked if the Mexican Vegetable Soup was vegan, and luckily it was. Later I read from their webpage that they always have a vegan option on the menu, and you can also get gluten free pasta if you call them at least half an hour earlier.

The soup was thick and spicy. It was served with bread and some nachos, fresh basil and sesame seeds.

Usually vegetarian soups in restaurants tend to be pureed carrot, cauliflower or other vegetable soups, which do taste good, but soon you’ll be hungry again. They also often contain cream or cheese. This one had beans in it, no dairy products and it was very filling.

I liked both food and the atmosphere very much. If I go to Jyväskylä again, I’d like eat in Soppabaari.