I’m visiting my sister in Helsinki this weekend. Saturday morning we woke up early, and went shopping as soon as the shops were open. I needed two pairs of shoes, and hadn’t find anything I like from my hometown. I found what I needed: red sneakers and black high heels. And I also bought some cruelty free cosmetics.

The weather was warm and sunny, and we decided to have a picnic. We made sushi (inari sushi and maki rolls with cucumber, avocado and carrot) and hummus and bought baguette, grapes and kalamata olives. Then we spent the rest of the day in nearby park eating, playing card games and just talking. What a great day.

Here we go again with another take on the Slowfood Sunday. Minimal effort, maximum results, just like a Sunday should be. The original recipe calls for a crockpot and labels this as a soup. Well, our version is a stew made in our cast-iron magic pot.

The recipe of the stew is sourced from this recipe at Savvy Vegetarian. Our version substitutes sweet potato with ordinary potato, scallions with onion, and the red pepper flakes with chili. For the chili part we used maybe 1/4 tsp of Blair’s Ultra Death 20/20 and 1 tsp of extra hot chili powder. Since we were out of curry powder, we quickly made some ourselves by using this recipe from Allrecipes.com. A nice basic curry.

The stew took some five hours in 175°C and the results were absolutely fantastic. A nice curried taste complemented by a very subtle sting from the chili. We had to add some water during the cooking process to avoid the food from becoming too dry, so if you’re going to try this out, keep this in mind.

On Saturday we had a Swedish movie night with our friends. The Russian movie night couple of months ago was in our home, and this time we went to their home. First we drank snaps, Akvavit of course. But we didn’t sing any Swedish snap songs. Akvavit was very good, it tasted like fennel with a hint of caraway seeds. 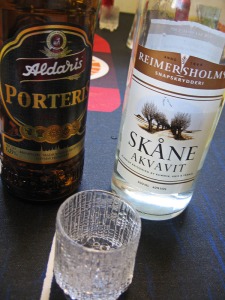 After the snaps, we had awesome pea soup. Seriously, it must have been the best pea soup I’ve ever had. Our friend had simmered it 5-6 hours, maybe that’s the secret of her soup. We couldn’t find any mellanöl or other Swedish beer, so we had porter instead.

We also had crisp bread and new Alpro soy margarine.

When we had finished our soup and bread, we watched the movie. Our friends had chosen Ingmar Bergman’s Wild Strawberries. If you haven’t seen it yet, I recommend buying/renting/borrowing a copy. Or if you have already seen it, you can watch it again.

After the film we had the main course. It was pyttipanna made with potatoes, onion, habanero and soy sausages. As a side dish we had cucumbers, which were similar to these Vinegar cucumbers, but they were made only with water, salt and dill.

For the dessert we had coffee and vanilla buns made with a recipe by The Vegan Swedes.

We had great time eating and watching the movie. Now we’ll have to decide which country we choose next. Finnish cuisine is strongly influenced by Russian and Swedish cuisines and all the food we’ve made for our movie nights are commonly eaten in Finland too. Maybe next time we’ll have a country that is not so close to us.